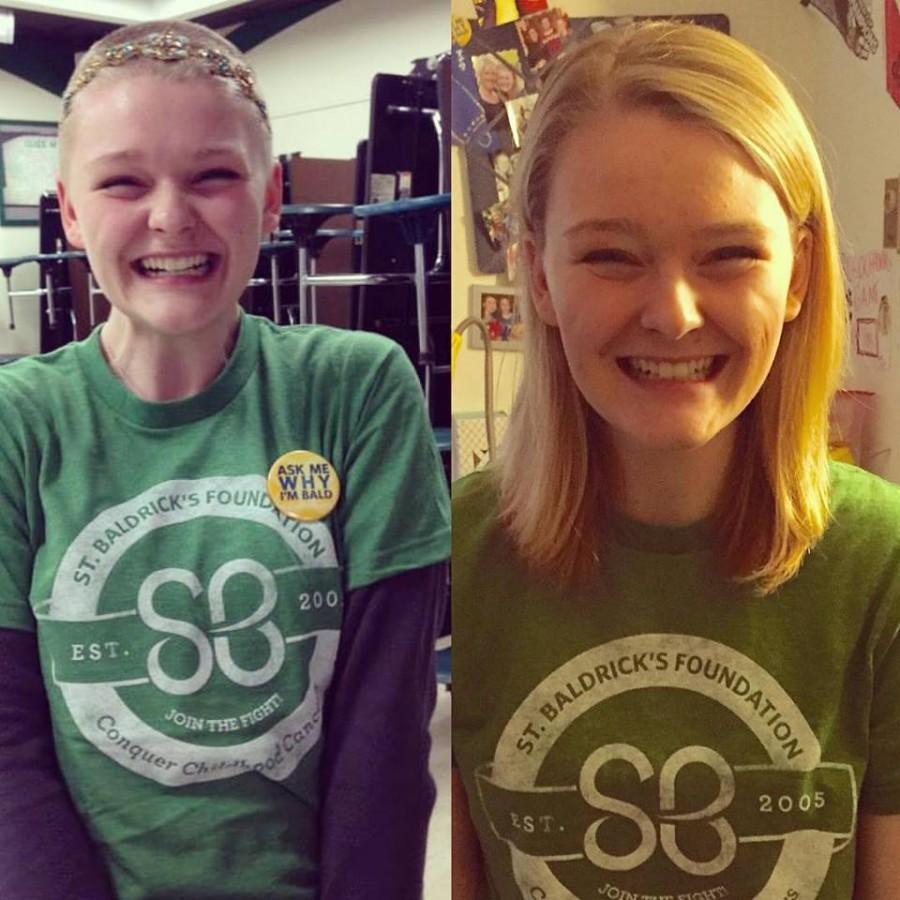 West alum, Lauren Crowe, before and after shaving her head for Saint Baldrick's.

It’s time to get out those green wigs and bead-necklaces. Grab a shamrock shake while you’re at it. With the month still filled with St. Patrick’s Day charm, not only are people breaking out the corned beef and cabbage, but it is also the time for donations and fundraisers supporting children’s cancer charity, the St. Baldrick’s Foundation.

The National Cancer Institute provides that approximately 15,780 children are diagnosed with some form of cancer every year. This is also the leading cause of mortality among children beyond infancy. It is these startling statistics that motivated the co-founders of St. Baldrick’s to work to make a difference in the lives of thousands of struggling kids.

For co-founder Tim Kenny, the catalyst came in 1999 when he tasked his associates Enda McDonnell and John Bender to come up with a way to give back in return for their career success. Inspired by the challenge, the pair decided to shave their heads for donations towards childhood cancer. Catching fire quickly across the nation, one million people had participated in a short three-year span. Then, in 2004, the St. Baldrick’s Foundation manifested to reach an even larger amount of volunteers and participants, all in the hopes of raising public awareness and funds for childhood cancer.

St. Baldrick’s has contributed over $118 million to cancer research and operates in all 50 states in America, as well as 28 total countries. The non-profit charity has also increased in popularity among teens and adolescents after various high school across the country began hosting events.

Glenbard West junior, Cori Payne, is planning to get in on the fun this year. While she may not be looking forward to shaving off all of her hair and being bald for a few weeks, Payne is excited to be part of such a great charity.

“I’m participating because I believe it’s for an important cause and I want to help however I can,” Payne said when asked about what motivated her to sign up for the event.

But, as Payne noted, if you aren’t interested in going completely bald, there are plenty of other ways to get involved with causes that matter and make a difference in someone’s life, “whether it’s donating blood, hair, or time, everyone can make a positive impact.”

If you are interested in participating in the St. Baldrick’s event, Crosstown Pub & Grill in Naperville is shaving heads on April 16th at 2:00 pm, and Glenbard West will be hosting its own event on March 23rd. You can also learn more and donate by visiting the St. Baldrick’s website at stbaldricks.org.