“I always thought that because our country was at war, the whole world was and that everyone was suffering like me." 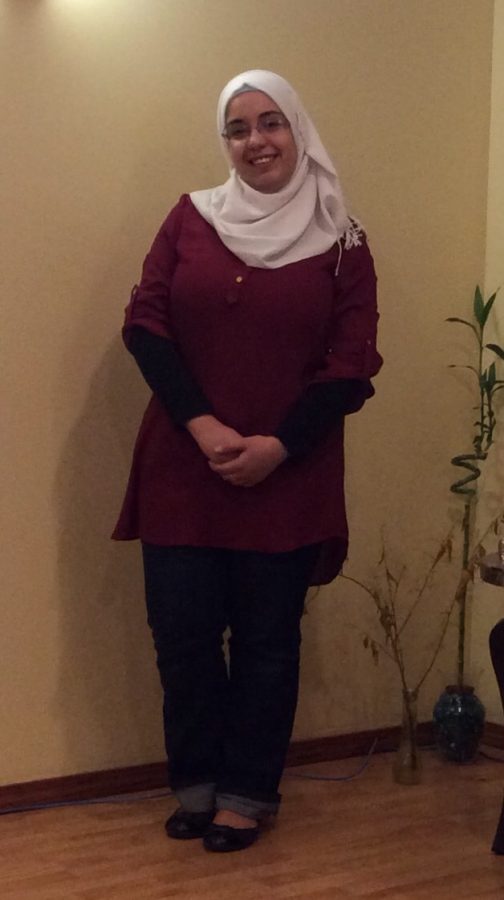 Hawraa Faisal happily poses in her current home after having been living in the U.S. for eight years.

At the age of eight, Hawraa Faisal, a current Glenbard West junior, and her family were forced to flee from their home in Baghdad, Iraq to Jordan and then the U.S. In 2003, Iraq was engaged in the Second Persian Gulf War, which involved U.S. and British troops who invaded Iraq, defeating many airmail forces. However, as a violent war was waged, many of innocent civilians were affected.

One of these families was Hawraa’s. When she was six years old she recalled the horrific start of it all.

“[When] the the U.S. invaded Iraq, our water supply and electricity [was cut off], usually limiting us to about 1 to 2 hours of electricity a day,” says Hawraa. However, one of these days in particular would be ingrained in her memory forever. That day, the generator in their house had not been working and her father was attempting to fix it while her and her brother were playing outside. As they decided to head back in, Hawraa recalled that she had left her coloring book behind and so decided to return only to catch sight of their house in flames. She later found out that a bomb exploding nearby had tipped over a lantern and in turn caught fire from gas seeping out of the generator.

“All I heard was screaming, then I saw my brother being helped out burned from head to toe,” says Hawraa. She also remembered questioning why this happened to her family. From there her family attempted to take him to six different hospitals all which were insufficient to treat the severity of his condition especially during wartime. “By the time they had traveled to Jordan to treat him it was too late,” says Hawraa.  “After he died, I wouldn’t talk to others or even eat,” she says. The loss of her brother had a huge impact on her, but it wouldn’t be the only loss she had suffered. Not much later, while her mother was pregnant a bomb exploded nearby creating a huge mass of debris. In order to shield her kids, her mother had covered them with her own body resulting in a miscarriage.  Hawraa’s father also suffered burns on his legs rendering him incapable of walking for six months.

After all the injuries mentally and physically sustained, Hawraa’s family then decided that in order to provide a better life for their family they needed to leave. They first took up residency in Jordan for two years, “but it never felt like home,” Hawraa says. It took a whole year, but soon enough she and her family were assigned to live in the U.S.

On August 1, 2008 Hawraa and her family finally moved to the U.S. They lived with another family for three weeks while her father looked for a job.

“My father would bike to work every day and come home at 1 am,” she says. They finally saved up enough to buy their current house. “We have a great life here, a great education, and we are just really happy,” says Hawraa. “We even help out other refugee families and aid them in getting situated.” However, when remembering her past, it is always difficult. “Why is it fair that some people have to suffer while others get to say to people like me that we don’t deserve to be here and that we don’t want you in our country?”