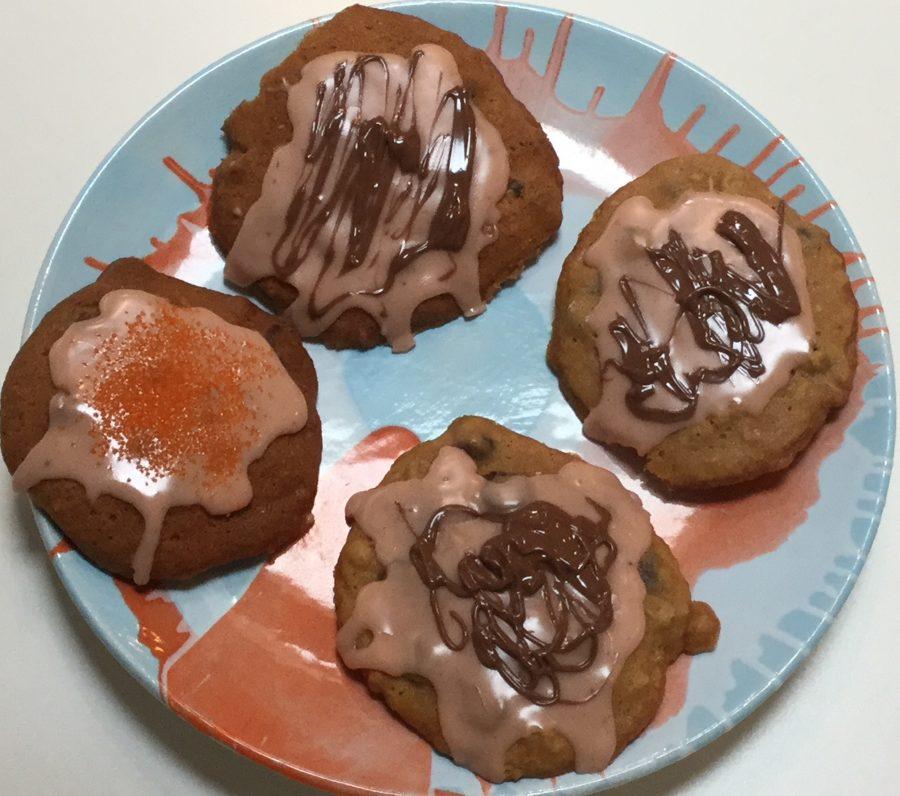 Finished Versions of the Harvest Moons with Custom Decorations

Whenever someone mentions Halloween, my first thought is pumpkin – pumpkin carving, pumpkin-shaped candy, pumpkin pie, the works. Accordingly, I decided to make pumpkin chocolate-chip cookies for the holiday.

First I gathered together all the ingredients for the dough and preheated the oven to 350℉. Next, I mixed together the butter, sugars, spices, salt, and baking soda. After adding the egg, I mixed the rolled oats into the cookie, poured in the flour alternately with the pumpkin puree, and put in the chocolate chips. A tip for adding the flour and pumpkin: place your hands over the electric stand mixing bowl as the ingredients are combined to prevent dust or pumpkin from flying onto your counter (it happened to me).

Once the dough was completed, I dropped the dough by tablespoonfuls onto the greased baking sheets, leaving large spaces between each ball of dough because the cookies spread quite a bit. This alteration to the recipe, which calls for the dough to be placed on the sheets by 1/4 – cupfuls, is because many people prefer smaller portions, and a cookie made of ¼ cup of dough can be monstrous in size. Finally, I put the cookies in the oven. The baking time for the top rack was close to 18 minutes, rather than the 20 in the recipe, and after I took out the top rack I put the lowest baking sheet on top for another 2-3 minutes, until the cookies were a light golden brown around their edges. Once the cookies were out of the oven, I moved them onto cooling racks to cool.

While the cookies cooled off, I made the glaze. Using a separate bowl, I mixed the powdered sugar, spices, and milk by hand until it formed a thinnish glaze. The color was greyish, so I added food coloring (yellow and red) to give the glaze a more autumn color. I suggest not adding red unless you wish to end up with an extremely pink glaze (something I learned only after the fact).

After I finished the glaze, I spread it onto the cookies and added my toppings. I used orange sprinkles and melted milk chocolate; however, any topping desired could be added, from nuts to chocolate shavings to myriad colors of sprinkles.

Once they were done, I tried a cookie. It was delicious, with a subtle hint of pumpkin and a nice combination of spices in the glaze. I declared the Harvest Moon recipe from the King Arthur Flour Cookie Companion a success!

Here is the Harvest Moon recipe from the King Arthur Flour Cookie Companion:

Preheat the oven to 350℉. Lightly grease (or line with parchment) two baking sheets.
To make the dough: In a large bowl, cream together the butter, sugars, vanilla, cinnamon, baking soda, and salt. Beat in the egg, then the oats. Add the flour alternately with the pumpkin. Stir in the chocolate chips.
Drop the dough by 1/4 -cupfuls onto the prepared baking sheets. Bake the cookies for 20 to 25 minutes, until they’re set and a very light golden brown around the edges. Remove them from the oven and transfer to a rack to cool.
To make the glaze: In a medium-sized bowl, stir together the sugar, spice, and enough milk or cream (about ¼ cup) to make a spreadable glaze.
Spread or drizzle each cookie with the glaze. Top with a sprinkle of pecans, if desired.