Len Vlahos shared details about his latest novel, as well as details on his writing process during a visit to Glenbard West. 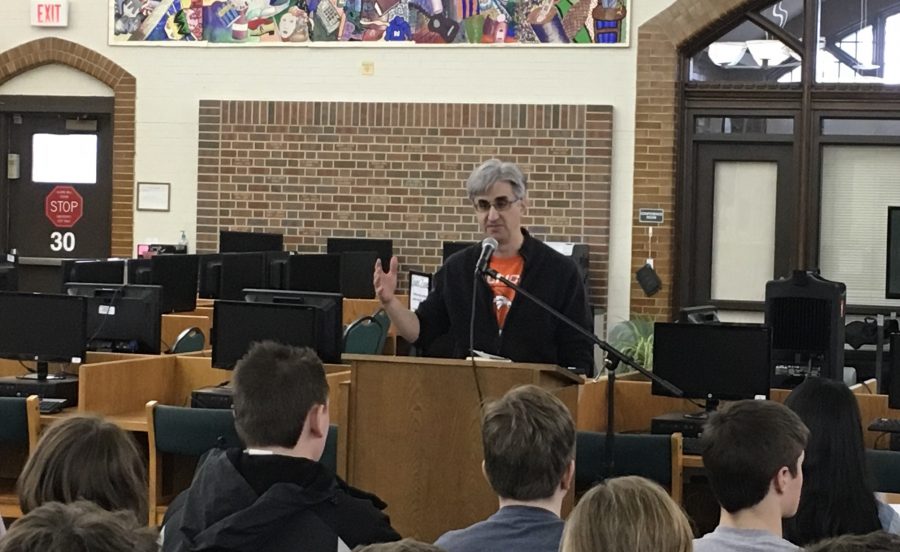 Writing fiction can often be shaped by real-life experiences, both personal and otherwise, and Len Vlahos’ novels are no exception. Vlahos visited Glenbard West to discuss and read from his latest book, Life in a Fishbowl, as well as to talk about his writing process in creating his novels.

Vlahos’ personal life has been the inspiration for previous novels of his. His first two novels, The Scar Boys and Scar Girl, were based on his experiences touring and playing in a punk rock band. However, Vlahos’ desire to write about subjects different from his own life experiences is what brought about the impetus for Life in a Fishbowl.

Life in a Fishbowl tells the story of a man with an inoperable brain tumor who sells his “life” to the highest bidder online and how these actions affect those closest to him. One of the inspirations for this novel, as Vlahos explained, was the case of Ian Usher, who in 2008 offered his “life” for auction after a divorce. This garnered a large amount of media attention and bears many parallels to the situation of Vlahos’ character Jared.

Additionally, Vlahos discussed his writing process. As is the case with many authors, he maintains a day job while writing novels and writes whenever works best in his schedule. He emphasized the importance of making time to write specifically without distractions at least a few times a week. As Vlahos elaborated, even with the events that occupy a busy life, it is important to prioritize writing whenever feasible in order to find success in writing.