Three movies destined to change the way you see dramas. 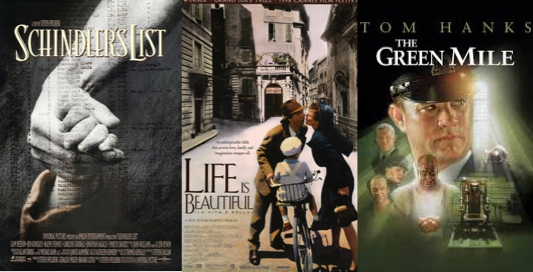 Arguably the best movie on this list, Schindler’s List, the epic historical period drama, is considered to be one of the greatest films ever made by IMDb and the American Film Institute, and rightfully so. Schindler’s List has won many awards, including seven academy awards (out of twelve nominations) and three Golden Globes.

Furthermore, the movie earned over $300 million, despite operating on only about $22 million. Director Steven Spielberg has created yet another classic movie to be remembered. Based on the book Schindler’s Ark, the story takes place in Krakow, Poland during World War II where Nazi Germany has begun to isolate Polish Jews into ghettos.

Meanwhile, a businessman, Oskar Schindler (played by Liam Neeson), arrives in Krakow seeking to make a fortune by opening a factory to produce enamelware. A member of the Nazi Party, Schindler uses bribes to obtain his factory and hires Itzhak Stern as his accountant, among many other Polish Jews as they are cheap labor. After a while, Stern’s advice sees Schindler become wealthy, moving Schindler up the ladder in German Society, adored by his fellow Nazis.

Things seem to be going well for Schindler, until he witnesses the brutal force the Nazis use to empty the Krakow Ghetto, killing Polish Jews – the elderly, women, even children – in a ruthless manner, in order to move the Jews to the Plaszow concentration camp. This horrifying event changes Schindler from an opportunistic industrialist into a caring man who seeks a brighter future for the world.

Maintaining his good relationship with the Nazi Party, primarily through more bribes, Schindler is afforded with some freedom from the party, allowing him to hire Jews, and thus protect them, in his factory. Rather than prioritizing his profits, Schindler aims to save as many lives as he can from the horrors that await the Jews in the concentration camps. Schindler must continue this charade to fool the Nazi officers despite the further scrutiny he receives during the end of the war. As the Germans begin to accept defeat, they are ordered to eliminate all of the Jews under their control, making it practically impossible for Schindler to save lives, resulting in a captivating ending that takes the viewer on an emotional roller coaster. Furthermore, the choice of the story being shot in black and white and approached as a documentary by Spielberg creates a sense of timelessness, enthralling the viewer by bringing the story another step closer life.

Life is Beautiful is considered to be the best foreign film of all time by its awards, box office success, and several critics. The star of the film, Roberto Benigni, who also co-wrote the film with Vincnzo Cerami, and plays as Guido Orefice.

In 1939, Guido arrives in Italy to work for his uncle Eliseo who owns a restaurant. Later, Guido falls in love with a girl named Dora, whom he continues to see randomly throughout the story. The first half of the movie revolves around Guido using his sharp comedy trying to win over Dora, including impersonating an Italian official to see Dora at her work and stealing Dora from her engagement party on a horse.

Finally winning over Dora, Guido builds a family with her; however, Guido will find life becomes much harder as the 1940s hit. The second half of the movie shifts from a sense of comedy to a sense of dread, as the family is forced to a concentration camp. Guido employs his vivid imagination to protect his son from the horrors of the Nazi concentration camp, and tries his best to keep both his wife and son safe.

As the movie progresses, fear increases for Guido, as, despite his best efforts, it seems his whole family will suffer the fate many other Jews did. With an unexpected ending and Guido’s endless comedy, which takes the viewer from laughter, with his jokes to win Dora, to tears, with his shining optimism to save his son, in this stunning comedic drama.

While a lesser known movie, The Green Mile, a fantasy crime drama, stuns audiences with its captivating storyline that becomes more and more exciting with each passing minute. Adapted from the Stephen King novel, the story is told as a flashback by the main character Paul Edgecomb, played by Tom Hanks.

Living in an assisted care home in 1999, Paul begins to cry while watching the film Top Hat. He explains to his concerned caretaker Elaine that the movie reminded him of what happened in 1935. Back then, Paul was a prison officer in charge of death row, which was referred to as the Green Mile. Paul was in charge of several guards who worked with him at Cold Mountain Penitentiary. Suffering from an excruciatingly painful bladder infection, Paul is less able than normal to perform his tasks as lead officer. This and the fact that Percy, a lower officer, appears mentally unhinged, lead to problems arising at the penitentiary. The cell mates become riled up and conflicts brew between the guards and the prisoners, ultimately leading to a mishap during an execution on Del (a prisoner), shocking the public and embarrassing the respectable name of the penitentiary.

However, things seem to improve as one of the prisoners, John Coffey, demonstrates supernatural powers. Seemingly able to do good, he cures people of their diseases simply by touching them. John cures Paul’s bladder infection and then heals Melinda Moores, wife of the warden, from a brain tumor. The ending deals with the struggle of whether John, a man of such wonderful power, should be executed. While the Green Mile provides emotional highs and lows, the movie leaves the viewer questioning its last few moments, as an engaging story ends with a tragic finale.