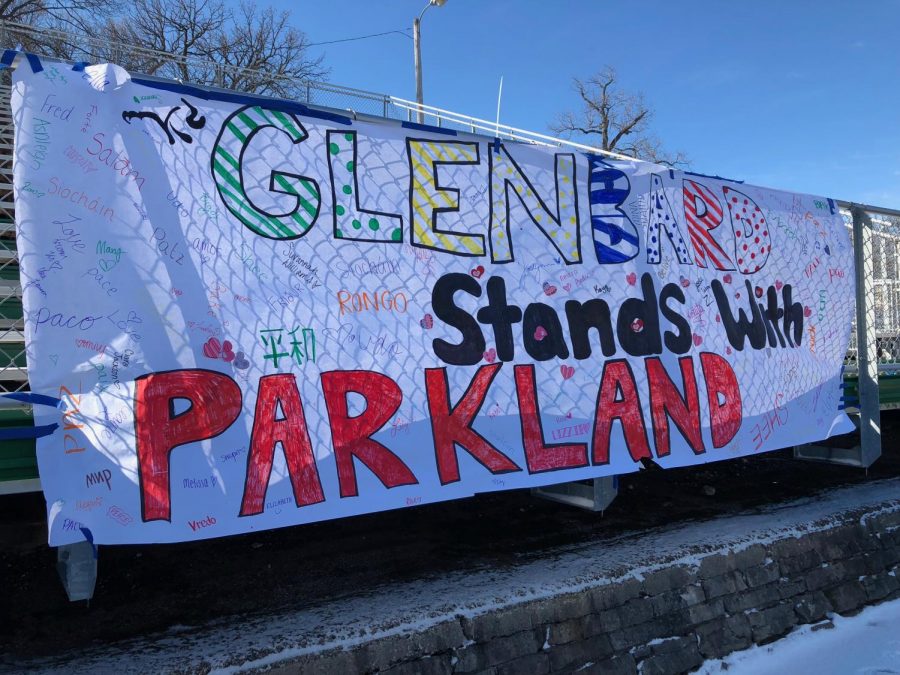 On March 14, 2018, students at Glenbard West High School were participants among students across the country in the National School Walkout to honor the victims of the Parkland, Florida shooting and to make a statement about gun violence.

At 10:00 a.m., participating students rose from their desks and left their classrooms, heading to Duchon Field. There, 17 empty desks with the names of the victims of the Marjory Stoneman Douglas High School shooting were placed around the track to memorialize the lives lost the previous month.

In addition to the number of empty desks, the quantity of 17 was a very prevalent theme for the day. Bright red pins with the number 17 were handed out to students who attended the Walkout. Also, the event only lasted 17 minutes, one minute to represent each life lost in the massacre.

As a show of solidarity, plastered on the fence of the football stands was a massive poster that read: “Glenbard Stands with Parkland.” Students took turns signing the banner and writing messages of encouragements to the people of Parkland, Florida.

Some students even sported their own posters with statements about gun violence and gun laws in the country.

Glenbard West Sophomore, Mia Navarro, who was in attendance at the event, states, “I participated in the walkout to remember the students lost in the recent Parkland tragedy, but also to advocate for stricter gun laws. From what we have all seen in the past few weeks, it’s clear that the massive amount of kids standing up for what they believe in is making a difference. I firmly believe that impact will continue to grow and make all the difference in the world.”

This challenge to American legislature is currently raised by children around the country. Even at West, student leaders have stepped up to help organize the events and voice their opinions on guns.

In an interview, they said, “It’s such an important issue for students across the country, I think, because when we hear about other schools getting shot up, hear about the last thing they said to their families, and what it feels like losing friends and people you grew up with, it’s scary to imagine that those people could be you. For this also to be student-led versus adults leading it, you feel a sense of pride that you’re going out and fighting for the change you want to see.”

The Walkout was mostly student-organized; however, it became backed by the school’s administration. In a letter released to the public, Superintendent David Larson states, “Our staff is working in concert with student leaders about any student-led activity planned for March 14.” In addition, he adds, “Our students who choose to participate in such activity on campus on March 14 will not be disciplined.”

With backing and support from the school system, students participating were marked absent for a “Student Function” rather than a truancy.

On the other hand, some students chose not to partake in the Walkout in order to make an opposing statement about their views on the current gun laws in America.

In an interview with a student at Glenbard West that did not attend the Walkout, and who wishes to remain anonymous, he states, “People don’t talk enough about the mental health of those who are willing to harm innocents. Guns don’t kill people, people kill people. Therefore banning guns should not be done, but rather testing those who are attempting to purchase the firearm must be fully sane and qualified to make the purchase.”

Whether a student possesses a view that American gun control is sufficient or not, it is clear that bold students taking action in the name of their beliefs does, and will continue to, have an impact on this country.