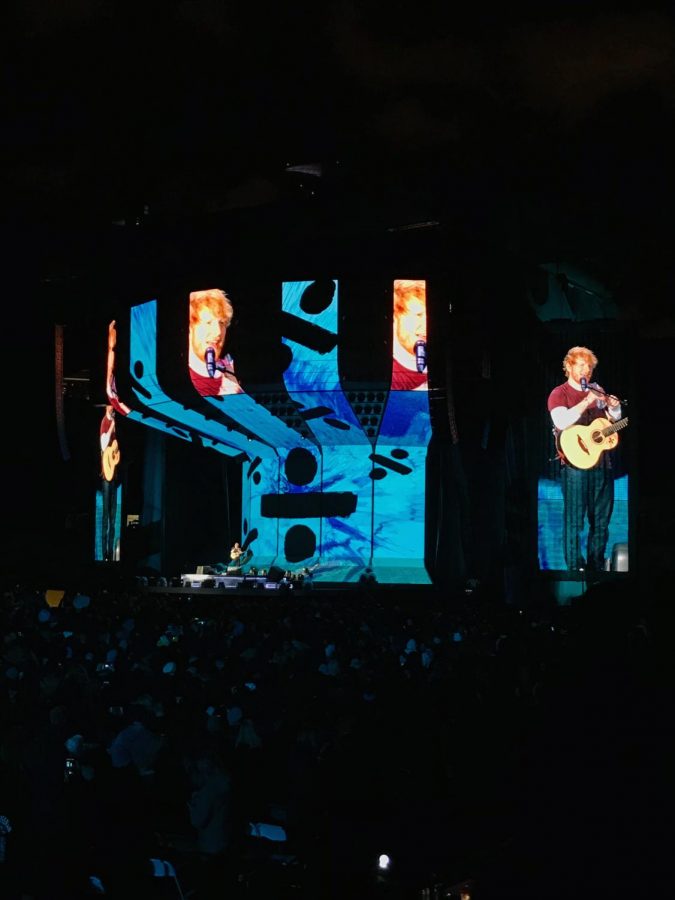 Ed Sheeran pauses to tell a funny story about him as a child.

From Irish roots and humble beginnings in England, Ed Sheeran is now a four-time Grammy-winning artist playing sold-out stadiums on his worldwide Divide Tour. On October 6th, Chicago had the pleasure of hosting Ed Sheeran’s performance in Soldier Field seating over 60,000 fans: “One of the biggest crowds [he has] ever played for,” says Sheeran.

Opening for Sheeran was the famous band Snow Patrol, which came with a bit of irony as Ed Sheeran had opened for them in Soldier Field years ago. Snow Patrol played a full set, including their most widely-known song “Chasing Cars.” Although not many people knew their songs, as they were older than our generation, many still enjoyed the great music. Sophomore Lily Ambler says, “[Snow Patrol was] good, but everyone was just waiting for Ed.”

A true statement indeed, as fans anxiously awaited Sheeran’s arrival on stage on the chilly October night. He entered quite calmly with just his guitar while the cheers from the thousands of screaming fans echoed throughout the stadium. He opened with “Castle On The Hill,” which has a special significance to Hilltoppers as Glenbard West is commonly referred to as the Castle on the Hill.

Ed Sheeran did not pre-record music or have a band on the stage. He only had a single acoustic guitar and various loop pedals on the stage floor that he used to create music live. His vocals were extremely impressive as he reached high notes we could only dream of. The audience could feel his passion for his job. As sophomore Autumn Klein puts it, “He was really into it and we all felt that listening to him.”

Many concert performers wear elaborate costumes and outfits. However, Sheeran’s wardrobe was quite the opposite of elaborate. He wore a simple white long sleeve T-shirt layered with a red short sleeve T-shirt and classic blue jeans. One outfit, however, that was exceptional was his Chicago Bears jersey he wore during the encore. Sophomore Colleen Shanahan said, “it was the best” and sophomore Meg Clements added that, “[she] loved how ‘Sheeran’ was on the back.”

Besides his signing and wardrobe, Sheeran had special touches that put the performance over the top. He stopped frequently to tell personal funny anecdotes and interacted with the crowd by having cheering competitions, asking the crowd to sing different notes, or clap to the beat of his songs. He also had very intriguing visuals in the background. They were customized for the deeper message behind each of his songs. Although he had lots of visuals, it did not over power his music. It added intensity and meaning to Sheeran’s performance. This made the crowd more involved with his performance and have more fun.

The night focused around Sheeran and his music, which is uncommon in this day and age where concerts consist of special effects and costumes. Sheeran’s simplistic approach to his performance allowed the audience to appreciate his pure talent and recognize his passion for his job. In addition, Ed Sheeran had seemingly endless energy on stage and he truly looked like he loved what he was doing. This was translated to the audience who were clearly enjoying themselves and the great music.  Although the North American leg of the tour is now over, many fans around the world await his arrival. Ed Sheeran’s unique “just a man and his guitar” approach was definitely an amazing experience.