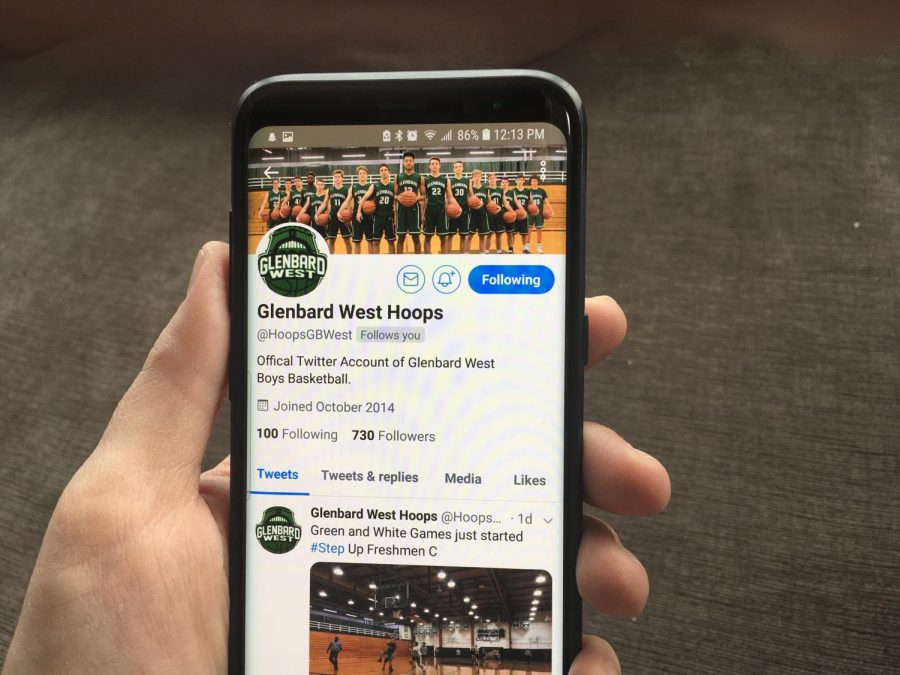 Social media’s presence at Glenbard West has grown through the promotion of after-school activities. There are many school accounts and groups on Instagram, Twitter, and Facebook that have helped promote Glenbard West’s extracurriculars, resulting in greater attendance and more students joining the programs. Each extracurricular embraces social media in different ways, however.

Each social media account chooses to promote themselves in different ways, all of which reaching and attracting students in some way. For example, Instagram account @gbwfh promotes the team bonding aspect of Field Hockey at Glenbard West, choosing to highlight the activities they do off the field rather than just on the field.  The Instagram account helps show the connection and relationships of the team members as well as attract new members who desire a strong, tight-knit bond like the one between Field Hockey players.

@HoopsGBWest on Twitter chooses to highlight the accomplishments of current and former boys basketball players and update their followers with current in-game box scores and time left on the clock.

The strong presence of social media is seen at all of the Glenbards. For example, Glenbard East German Club President Jaycie Griffin has stated, “social media is super important when trying to get new members – it’s what actually gets people to go [to club activities].”

Social media accounts can do a lot for extracurricular activities and sports teams.  According to Athletic Business, “Social media is not a tool, social media can be an asset to help a student-athlete’s individual brand, their community, their team and the school they represent.”

Chad Hetlet, varsity football coach, stated that both he and the parents help run the Twitter and Facebook social media accounts.  Hetlet also stated that the school gets coverage on football by sharing other links from local news.

Former Glenbard West Hitter Mo Khattab stated, “There’s usually a lot of [newspaper] photographers taking pictures on the sidelines of us during the game, and there’s usually updates about the game while it’s happening, on the Twitter website.”

While sharing news covering is a great benefit of school social media accounts, they also help students share important information with each other.   Glenbard West junior Audrey Pauer stated, “We communicate exclusively through Facebook messenger” when talking about her fellow Forensics students. The communication aspect shows how social media’s role is not just promoting clubs and reaching the public, but also helping club members communicate with one another, whether it be through the use of the Twitter, the Remind 101 app, or Facebook Messenger.

This all helps show the role social media plays at Glenbard West as it helps the students get updates on games, know when activities are being held, and helps clubs and sports members communicate. Its impact is a lot more powerful than one might think. Pictures are taken for sports accounts, stats are taken for online records, members promote in various ways, and there’s regular communication through the platforms.