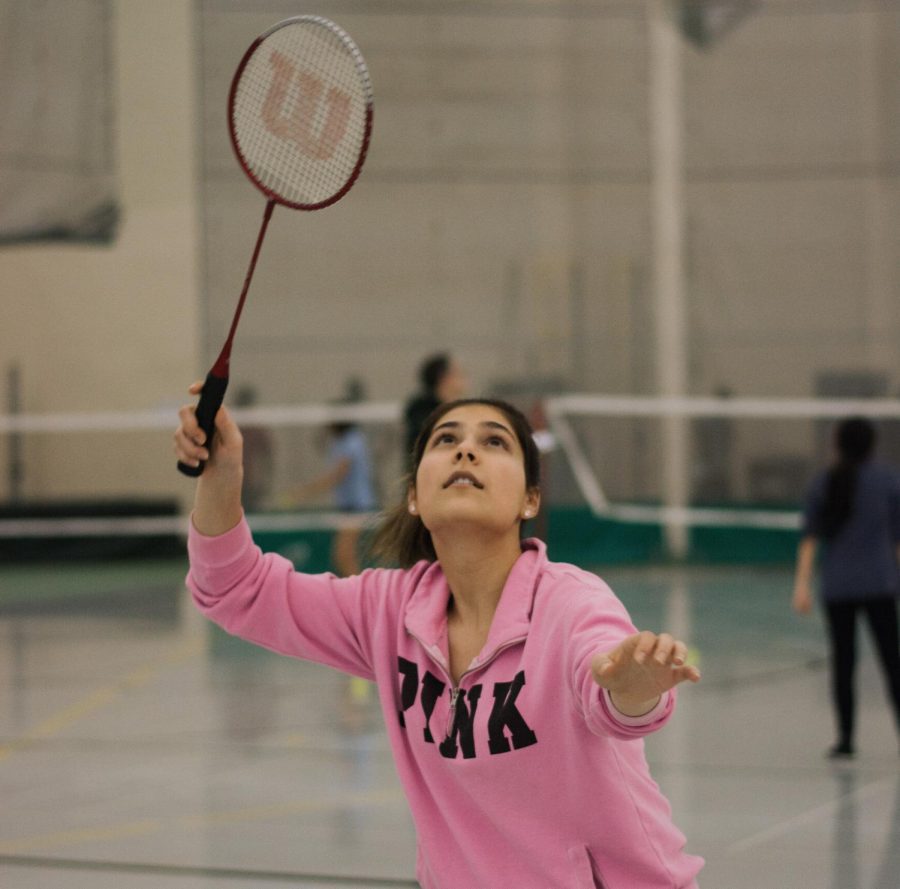 Junior varsity player Laiba Khan receives a serve from a teammate during practice.

The badminton season started early this March. As the season continues, the team continues to hone skills to prepare for conference matches.

Badminton is appealing to many participants, as it is described as fun, fast-paced, and easy to learn. This year, around seventy-five players are participating. Sophomore Anna Svach, who is playing for the first time on the team, says badminton is most appealing to new players because “it’s such an easy sport to pick up” which allows “anyone to join.”

This year, the badminton team saw impactful changes, as the entire coaching staff is new. Coach Gatz, a cheer and boys tennis coach, has taught badminton to her physical education class for 10 years. When the position opened up, she “jumped at the opportunity” and was “excited to start this new position.” However, she foresees challenges, as our team is in a tough conference. She hopes to arrange “competitive practices” to prepare for upcoming competitions.

Coach Marino, who coaches the JV1 team, enjoys badminton for its “fast pace.” He believes that “a lot more goes into the game than people actually think.” For example, there is quite a bit of strategy utilized on the court.

Coach Liechty, JV 2 coach, who is also the current Chess team coach, says that he decided to coach the team because he has always loved badminton, and “wanted to try [his] hand at coaching something new.” However, he expects it to be challenging to find the best way to build skills. Despite this, he is “confident …[that the coaches] will get the best out of [the] team this season” and is “really excited to work with [the] group of girls.”

Coach Marston, the freshman coach, decided to become a coach this year due to the “competitive nature” of the sport, and aims to “improve each day,” while “[treating] each match as a learning experience.”

This year, the coaches advocated to not cut any players. According to Coach Gatz, “Glenbard West prides itself by including as many students as possible.” She explains, “The more players we have competing, the more will stay with the program throughout the four years.” Athletes trying out for junior varsity were put through a process where they had to showcase their different types of serves, clears, smashes, and drops. Despite the level separation, JV 1 and JV 2 still plan to practice together. Varsity tryouts were conducted similarly and coordinated by Coach Gatz.

Sophomore varsity player Cate Borgman says she is eager to “make new friends” and “catch up with old people.” Indeed, this is true as many more people tried out for the sport this year than last year. Varsity player Aarya Regmi says that “everyone’s kind of like a family…and it feels like [they] are getting to know each other again.”

Some people may overlook badminton’s difficulty , but many Hilltopper badminton players argue that it is much harder than it seems. Freshman Madeline Kirincic describes the sport as “very underrated,” but thinks it is “actually really hard work.”

Expanding on this, Maja Jukic, a current senior and varsity player, explains that “it is […] important to steadily get stronger, and learn from our mistakes.” She believes that she, as well as the team, can achieve these goals by “cheering each other on and working together in practice.”

Senior Lamisah Khan, who is on the varsity team, set high goals for herself and the team. “I hope to give back more positive vibes, and just work well with each other no matter what,” she said. “As long as we can help each other and work hard during practices it will improve all of our games.”

The West badminton team reflects the positivity necessary for success in this sport. As conference matches are in the future, the team hopes to utilize practices well to be successful.