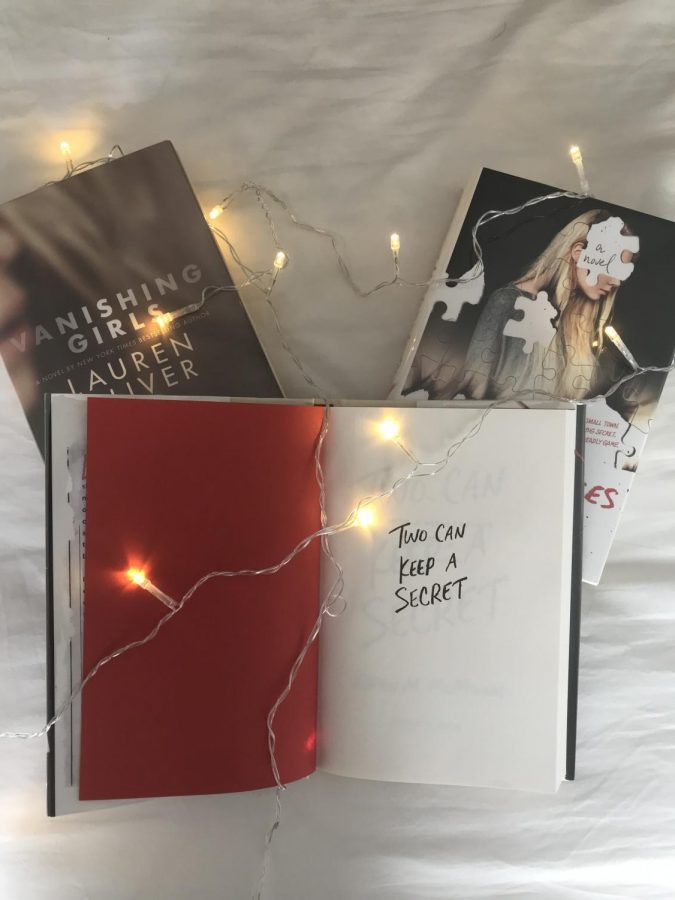 Pictured from left to right: Vanishing Girls, Two Can Keep a Secret, and Hidden Pieces.

Young adult mystery is usually a hit or miss in terms of plot and characters as it is often oversimplified, making the novel underdeveloped or slow to read. However, there are some cases where the overall enjoyment of the novel is solely dependent on the reader. Explore this list of books below to find common flaws and strengths in young adult fiction that can make the novel a must-read or not.

Two Can Keep a Secret, Karen M. McManus: Two Can Keep a Secret centers around the mysteries of a small town, Echo Ridge. At this seemingly perfect town, Ellery’s aunt went missing at age seventeen and, five years ago, a homecoming queen was killed, putting the town on the map and ruining its quaint charm. Despite all these suspicious cases and potential harm, Ellery has to move there to live with her grandmother who she barely knows. Before school even starts for her, someone’s declared open season on homecoming, vowing to make it as dangerous as it was five years ago. As if to prove it, another girl goes missing. An easy read with simple writing, Two Can Keep a Secret allows the reader to focus on the mystery. Although at times, the plot can be underdeveloped and repetitive, the force of the mystery at hand enables the reader to push through these parts. Similar to the plot, the characters of the novel also lagged in terms of character development. Despite the diversity of the characters, the depth of them was not explored to a large extent. However, the novel compensates for its simplicity by leaving a chilling impression of a plot twist. Easy to get through and intriguing, Two Can Keep a Secret is not a story to miss.
Vanishing Girls, Lauren Oliver: Sisters Dara and Nick used to be inseparable before the accident that scarred Dara’s face left the two completely estranged. When Dara disappears on her birthday, Nick assumes it is a joke. However, when nine-year-old Madeline Snow seems to have vanished as well, Nick realizes that the two cases may be linked and starts a hunt to find her sister. Although the general mystery and plot of the novel is interesting, it starts rather late, slowing the book’s development. However, this is to establish the dynamic between Dara and Nick, in which, though they were inseparable, and, in some cases, scarily codependent, they never actually were able to form a bond. Their relationship was fueled by judgment, jealousy, and turning a blind eye to each other’s unjust decisions. Despite the characters’ unlikability, the relationships between them were interesting; similar to the plot, which has its flaws, but continues to hook the readers. The main issue of the novel was its intended riveting scene. The final twist employed is commonly seen in other mystery novels, including We Were Liars, though it was still interesting and, to a smaller extent, unexpected to see it unfold. In addition, the general writing style of the novel more than compensates for it. The simplicity in the writing and diction causes the novel to be purely enjoyable. Interactive features, including newspaper clippings, overall, add to the depth of the novel and the mystery at hand, making it more unique. Though with its flaws, Vanishing Girls, at its core, is a basic mystery with intriguing character dynamics and structure, making it a book to read.
Hidden Pieces, Paula Stokes: Similar to most young adult mystery novels, the plot of Hidden Pieces focuses on keeping secrets. Embry Woods is no exception to the norm, holding small secrets about her past and larger ones about her current relationship with the town’s favorite boy that has thinned due to her feelings for someone new. The most significant secret that she has ever kept, however, is about the night at the Sea Cliff Inn, involving a fire and a homeless man. Though Embry is viewed as the town’s hero post-situation, just like the boy she is involved with, it is far from the truth. Vowing to take her secrets to her grave, her plan is shortly interrupted until she receives an anonymous note, meaning someone else knows the truth. Next comes a series of threatening messages, blackmailing Embry to make impossible choices and put her loved ones at risk. An unknown individual is playing a high stakes game where no one is safe and the last move is murder. Despite the plot feeling drawn out in some places, the tension of the mystery grew as it caused the reader to hold on to not knowing all the details of the story immediately. This led to a common distrust of all the characters of the story as it was difficult to figure out who is responsible, with each individual beginning to look suspicious under the circumstances. Unfortunately, the characters were discovered to be bland and almost cliché with their only depth being their secrets. However, overall, the mystery does provide minimal compensation. Hidden Pieces takes inspiration from Pretty Little Liars in terms of its plot, centered around secrets, lies, and an omniscient blackmailer who exposes the characters and makes them appear more guilty than they have ever cared to reveal. With this concrete storyline Hidden Places shares with the Pretty Little Liars series, it also includes some of the series’ flaws such as not handling the situation by going to the authorities or the slight impossibility that the blackmailer would not be able to pull their elaborate schemes off without being detected. The former reason, on the other hand, is more justifiable, as each character desperately wants to keep their secrets buried, but these flaws detract away from the novel’s potential to mimic a true mystery. Though Hidden Places is an overall average book, with a simple mystery and characters, individual preference will be able to make this novel a must-read or not.

Through looking through the extensive analyses of each novel that includes both of its pros and cons, it can be seen that the likability of each mystery certainly depends on the reader. Hopefully, you have found a mystery book that compensates for its flaws and that interests you.