After an eventful summer, Glenbard West students share their views on the importance of different newsworthy occasions. 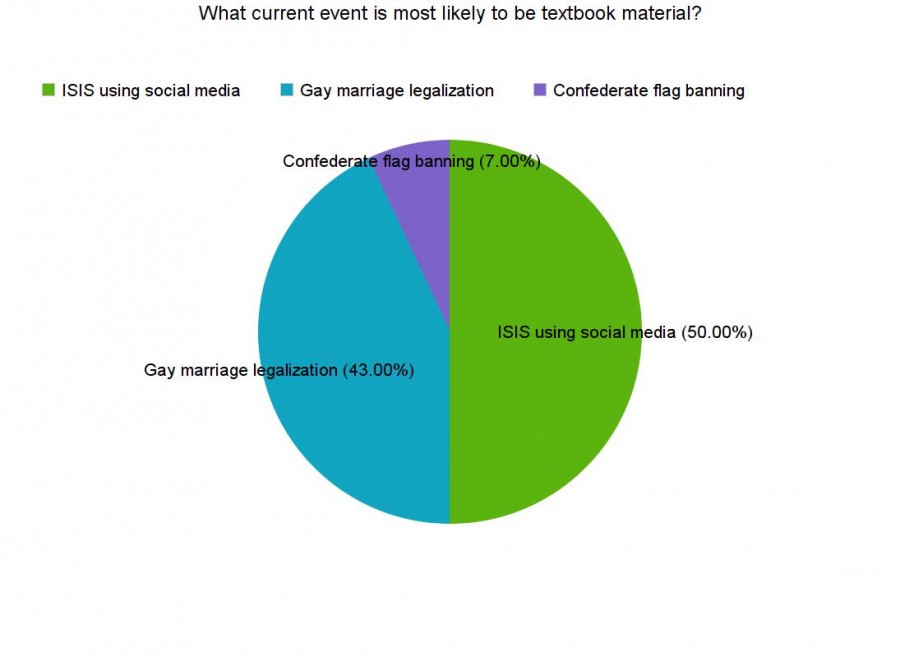 It’s hard to pinpoint exactly what the most monumental event of the past few months is. It begs the question of what affects us, or the country as a whole, the most? Is it the Islamic State in Iraq and Syria (ISIS) utilizing the seemingly harmless tool of social media to recruit Americans? Certainly, that’s some awfully colossal news. But we can’t ignore the milestone in our nation’s history of gay marriage being legalized in all 50 states. Yet another step forward for the US includes the Confederate flag beginning to be banned in multiple places.

Personally, I can imagine students being taught about any of these occurrences in a history class in just a matter of years. But which topic seems most likely to be written in a textbook eventually? That’s what I asked a number of Glenbard West students.

Half of the students I surveyed believed the biggest issue our country is currently dealing with is ISIS. Throughout 2015, ISIS has been appearing in the news more and more frequently. This anti-Western militant group was constructed with the intent of creating an independent Islamic state, and they have been far too dangerously effective. They have a new secret weapon, capable of surpassing all security and surveillance: social media. Online, ISIS is able to recruit American sympathizers to help them achieve their goal. So far, a few thousand have joined them. With this new, seemingly impossible to beat strategy, it’s no wonder why 50% of those asked picture the matter of ISIS being taught in a classroom.

However, to 43% of the group, same-sex marriage is more monumental. June 26, 2015 is surely a date that will go down in history as the day gay marriage was legalized for the entire country. This Supreme Court ruling is the most tremendous victory for the LGBTQ community yet. In a 5-4 ruling, it was decided that no state has the power to ban same-sex marriage. For the US, this is a step in the right direction; a step many have been waiting for the law to take. One of the 43%, Gabi Winter, a junior, says, “I believe that gay marriage being legalized […] is something that we will [eventually] wonder why it took so long to happen.” With that retrospective point of view, it is highly probable that future students may have to memorize the date June 26, 2015 for a history test.

With less popularity on the survey, the Confederate flag beginning to be banned only received 7% of votes. For so long, the flag has stood for racism, a mindset that our nation has been fighting to eradicate. It’s hard to believe that this symbol is still around more than 100 years after the Civil War. There is controversy over whether or not the government has the right to ban it. But recently, numerous states are making an effort to remove the flag, such as in South Carolina after the Charleston shooting. Numerous establishments are opting to ban it themselves, like Walmart, Amazon, Warner Bros., and more. However, since our country is only scratching the surface with this problem, it didn’t stand out as the most distinguished occasion.

All in all, the crisis with ISIS seems to be the most staggering current event for students, although issues with both gay marriage and the Confederate flag are still prominent, of course. But what will people be reading in textbooks in, say, 20 years? Only time will tell.