Improv team “That One Group” preps for another Theatre Showcase 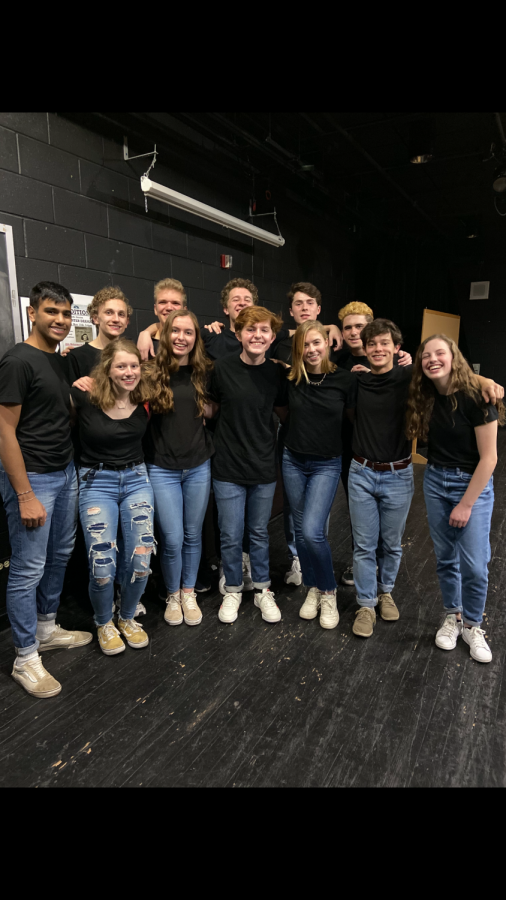 West students revived and redesigned “That One Group,” the school’s sole improv team. They have been running auditions, welcoming new members and practicing in hopes of a big success under their first official sponsor and with 13 newly inducted student-actors.

“That One Group,” or TOG, has been a distinguished improv group set separate from the other theatre programs at West for over a decade.

“It’s another outlet, a showcase for student’s comedic creativity,” states Mrs. Tricia Posegay, English teacher and current advisor for “That One Group.” Posegay has taught theatre at a handful of schools, but now has transitioned to a different aspect of the subject: comedy.

Improv, as defined by Forbes Magazine, is a comedic acting practice based on “softened focus and heightened awareness.” In essence, actors will conduct short skits outlining scenarios shared from an audience. The most notable rule in improv is simple: say YES and keep the action going.

Auditions for TOG were held in August and September of this school year, whereas previous years they were conducted at the end of the school year. This meant that, by Mrs. Posegay’s new mission, freshmen could be invited to audition for the club.

Rather than the traditional stage audition, TOG stands apart in its reliance on the students to conduct the auditions and the meeting for the team. “We didn’t want to see the same kind of humor among everyone,” shares senior Griffin Murphy, the club’s Vice President and co-leader of the auditions.

Emily Davidson, President of the club, and Murphy have led the “games” at rehearsals that occur every Sunday, giving students an easy way to join together and learn from one another. These games range from open-ended acting practice to more involved skits based on locations or scenarios shared from the audience.

Improv has been prevalent in the Chicagoland area for over 60 years, where comedians would practice quick scenarios that weren’t routine. Second City, the premier improv theatre in Chicago, has been teaching workshops and performing shows since the late 1960s, fostering the talents of such names as Steve Carrell, Tina Fey and Dan Aykroyd.

“Improv isn’t really for those who fear a challenge,” says Jen Hoyt, Second City’s Vice President of Production. At the theatre, Hoyt works as the coordinator between actors and the ever-changing audience.

The theatre opportunities are “lively” in Chicago, according to Hoyt. With distinguishable programs in the suburbs, “the flow of talent into the city is astounding.” While Hoyt does not run auditions, she has seen a variety of talent that branches off into many subcategories of acting, just as West has strewed its talent amongst several different clubs and teams with different interests.

TOG has been around for many years. Over a decade ago, there were variety shows at West that gave a specific concentration of students “an identity for themselves that made it possible for them to have their own shows,” states Mr. Mike Fox, theatre teacher and the group’s founding advisor. From out of the Black Box, an auxiliary theatre turned classroom here at West, many West alumni have recounted to Mr. Fox their interest in improv as it improves their “sense of spontaneity.”

Mark Campbell, a past alum of Glenbard West, started with TOG and continued to study theatre in his undergraduate studies. After gaining recognition through Improv Olympics, another theatre native to Chicago, Campbell got a gig at Second City.

“I can’t think of other schools that have their own improv team,” says Mr. Fox. At West, where performance is an important cornerstone of the student body, TOG is only a small piece of the speech and theatre teams.

Mrs. Posegay states that the club “is an easy way to manage student stress.” Weekly practices are inviting, fun and creative ways for students to gain confidence and grow a community.

“I admire anyone who gets on stage and doesn’t know what the audience will throw at them,” says Mrs. Posegay. Although her start in theatre wasn’t in improv, Mrs. Posegay feels she performs in such a way every day in the classroom.

Whether it be an invitation to a new and exciting acting opportunity, or an outlet for creativity or building relationships, That One Group has begun their weekly rehearsals for three shows this school year, the first occurring only weeks ago on November 8th.

“There isn’t much rehearsal we can do, weirdly enough.” Griffin Murphy smiled as he said this. As a newer member since his junior year, Murphy and Davidson have led the group to practice certain scenarios given to students by students.

“The show was very impressive, and I loved seeing my peers perform in an activity passionately but also for fun,” said senior audience member Chloe Davis. The first TOG showcase was undoubtedly a huge success seeing their “Egg TOG” theme attracted many students and community members to the hour long event. Laughs were shared as the team set the standard for great comedy in their diverse production, which will be displayed twice more next semester. Make sure to catch their next show on February 7th!