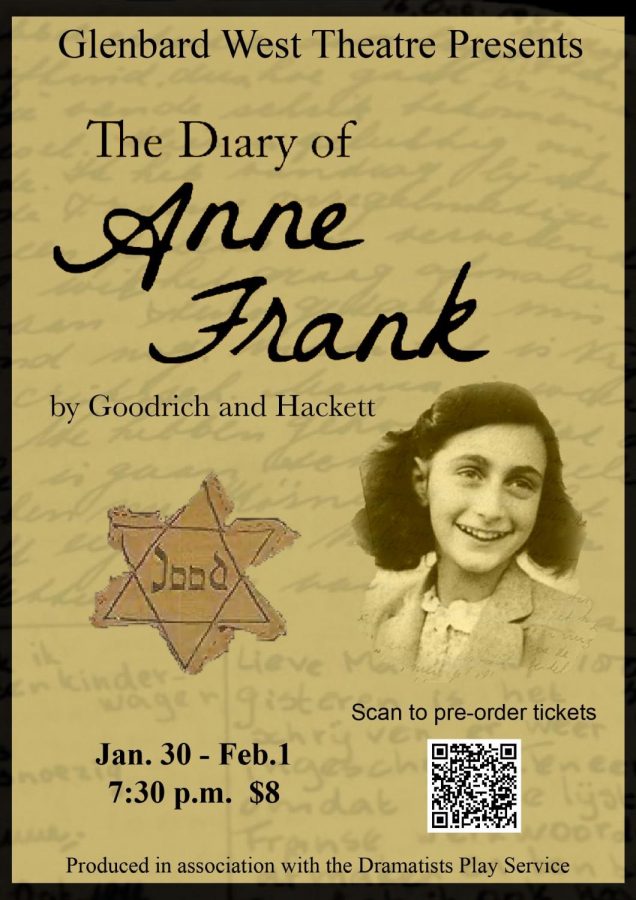 A poster created by the student-ran business team publicizing the upcoming winter play, "The Diary of Anne Frank".

Mark your calendars! The Glenbard West Theatre Department is thrilled to announce the drama-filled story of The Diary of Anne Frank, set to open on January 30th. The cast, crew, and production team have been working meticulously since the beginning of November to help bring this classic narrative to life. Come backstage to learn about the process of how this show transformed into the moving, captivating production!

Glenbard West alumni Molly Hernandez is a recognizable face around campus. From her time at West, she starred on the Glenbard West stage as West Side Story’s Maria and Macbeth’s Lady Macbeth. More recently, Ms. Hernandez has appeared in episodes of the television series Chicago PD.

Currently, some of you may know her as Srta. Hernandez, as she is one of West’s long-term substitute teachers in the World Language Department. Fun fact: in her free time, she performs intricate circus routines including stilt walking, juggling, and partner acrobatics. Ms. Hernandez is thrilled, however, to return to her alma mater to help direct this year’s winter play.

She chose to bring to life the story of Anne Frank, a young Jewish girl who hid from Hitler’s Nazi Party in a secret annex of her father’s business in Amsterdam during World War II. As Ms. Hernandez stated, this story offers “extreme social relevance” to what is going on right now “in our own country” due to the unsettling “conditions [under which] immigrants are being held at the border.” Hernandez elaborated on this by how the headlines we see today are very similar “to the ones from Anne’s diary,” such as kids coming home to “find their parents are missing,” or children dying not from extermination, but of the “lack of hygiene in the camps,” which is why she believes “this story needs to be told and it needs to be told right now.”

One of the most important and vital goals Ms. Hernandez and the cast maintained throughout the rehearsal progress was to address this topic in the most respectful way possible. The cast spent the first week of rehearsals doing tables reads, which were filled with, as Ms. Hernandez puts it, “questions about the script and characters,” because this story is not fictional, it is a “real-life historical story.” This helped inspire the cast to further honor the real-life Jewish characters they are portraying.

Sophia Danno, a junior who plays Anne Frank, shared her experience thus far in this production. She said she walked in cold to this process, given that she has not been in a production for over three years. However, after meeting 97-year-old Holocaust survivor, Joyce Wagner, the mother of Glenbard District 87 staff member Gilda Ross, Sophia felt inspired and awed by Wagner’s advice.

Wagner spoke to the cast and other staff and crew members who wanted to learn about her life story in late November. Wagner, after playing a film about her life struggles, told everyone that they need to “be the change-makers” in order to make a world full of “unity, respect, and tolerance.” Sophia shared that this “chang[ed] [her] perspective,” and she considered it “a moment [that she will] never forget.” Sophia said she is excited to finally show the public the story of her character’s life.

Tickets for The Diary of Anne Frank can be purchased online through the theatre club’s website or at the auditorium doors the night of the performance. All of the showtimes will be at 7:30 p.m. on Jan. 30, Jan. 31, and Feb. 1. Come and support Glenbard West’s Theatre Department this winter by seeing this memorable production!