When conflict arises, what are the odds of another world war or being drafted? 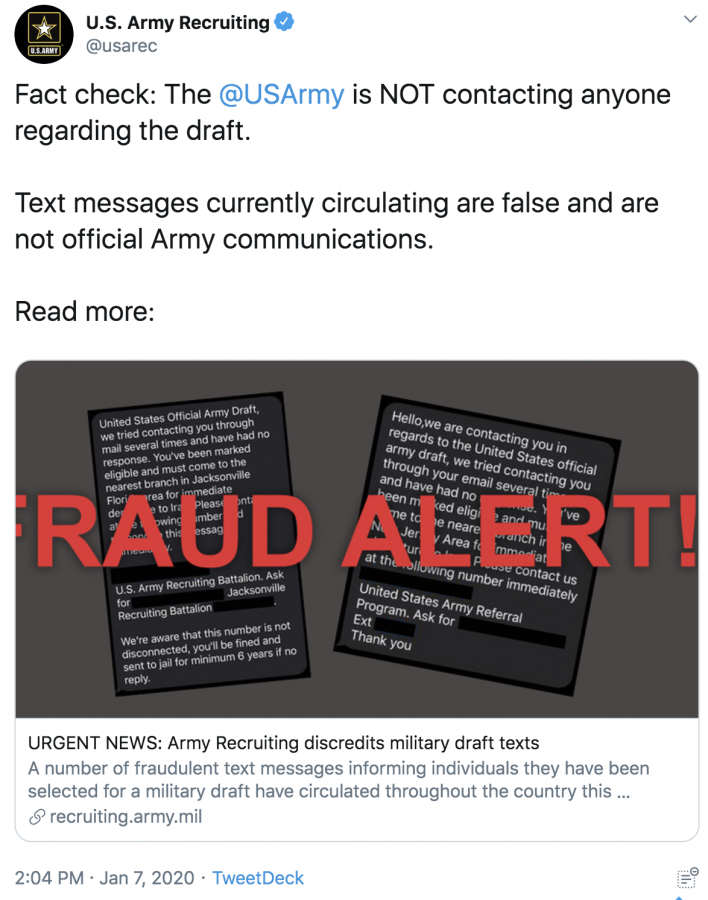 The U.S Army Recruiting Twitter tweeted that "The @USArmy is NOT contacting anyone regarding the draft" on January 7, 2020.

You’ve seen the memes take over Twitter and Instagram. You’ve wondered what a third World War could mean and what our current relationship is like with Iran. You’ve have searched on Google for answers. Maybe you’ve feared a war, or even had thoughts about being drafted yourself.

As a hot topic of January, World War 3 is on a lot of teenagers’ minds. It’s no wonder because social media has been full of meme posts of a potential outbreak. Misinformation marks these memes and it is time to separate fact from fiction.

Here’s a full breakdown of how we got here, what the stakes are, and what the current situation is:

Glenbard West social studies teacher, Mr. Broccolo, gave a valuable insight on our history with Iran. He elaborated on this topic saying, “For a good part of the twentieth century, Iran and the US were fairly good allies, especially economically as the U.S. imported a lot of petroleum [oil]”. Mr. Broccolo then went on to comment that this has changed, however, and the two countries have been “the polar opposite” since the “1978/79 revolution that overthrew the Shah” and the worries about “American hostages held there.”

Following almost forty years of animosity, former President Barack Obama aimed to diplomatically better relations with Iran. His administration created a pact known as the Iran Nuclear Deal, which was set into effect in July, 2015 and hoped to discourage Iran from receiving nuclear weapons in return for the easing of economic embargoes.

If the United States decided to launch an attack against Iran, the whole Middle Eastern region would feel the effects. Iran has proxies, an ally who can be relied upon to act in one’s behalf, throughout the area and is allied with militant groups, namely one being the Hezbollah of Lebanon. An estimate coming from the Pentagon that was released in April found that proxy Iranian forces have killed more than 608 US troops in Iraq between 2003 and 2011.

Iran is allied with both China and Russia, but it’s still up in the air how these major players will respond if or when a war occurs. The key United States allies, such as Israel and Saudi Arabia, which are adversaries of Iran and are very close geographically, would also likely get sucked into a catastrophic US-Iran war.

So, should Glenbard West students be scared of a mandatory draft? To sum it up, Mr. Broccolo says students “should be much more frightened of getting behind the wheel of your car than of getting drafted.” The last time the US underwent a military draft was in 1972. Mr. Broccolo recounts having to leave his name for selective service during the 80s, but this in of itself was “unbelievably unpopular” and he “would bet every cent to [his] name there will not be a draft… unless there is a giant world war of some kind.”