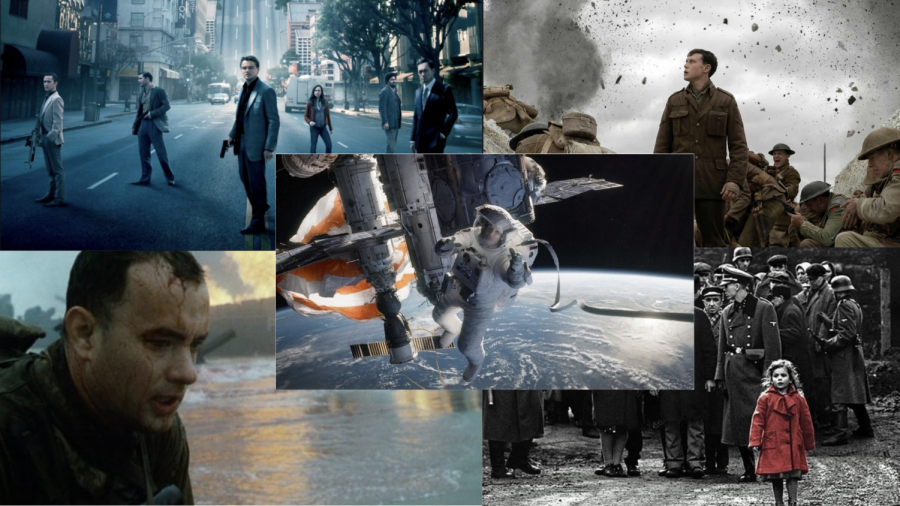 On January 10th, 2020, Sam Mendes’ 1917 was released in theatres around the country. It received universal praise from audiences and critics alike, and was nominated for ten Academy Awards, including one for Best Picture. One of these nominations was for Best Cinematography. Cinematography is “the art of photography and visual storytelling in a motion picture or television show,” according to Academy Award nominated director David Lynch. He says it includes “all on-screen visual elements” such as “lighting, framing, composition, camera motion, camera angles, film selection, lens choices, depth of field, zoom, focus, color, exposure, and filtration.” With this in mind, we can analyze modern masterpieces of cinematography. These five movies changed cinema, either by shocking us with new concepts, or by revamping tried and true concepts.

Deciding to shoot your entire film in black and white is a very bold move. However, cinematographer Janusz Kaminski earned his Academy Award for this movie by making it look disturbingly real. Combined with Steven Spielberg’s powerful directing, this movie appears so raw and realistic that it looks more like a documentary than a movie. In one scene, a squadron of German soldiers moves through a Polish ghetto, massacring hundreds of hiding Jews. The camera makes multiple quick cuts, showing different soldiers as they move through the ghetto. An SS officer sadistically playing piano during the scene only adds to the horror. This scene implies many actions without actually showing them. For example, we are given a view of the entire ghetto at night, and we see windows sporadically flashing, implying gunshots. This lets the viewers see the brutality of the Holocaust in their own minds, making the scene much more powerful than if they simply showed us all of the murders.

Any movie focusing on war must have the appropriate camerawork to demonstrate its horrors. Saving Private Ryan sets the bar high with its famous, 24-minute opening scene on Omaha Beach. As American soldiers storm the beach, German machine gunners and artillery kill hundreds right in front of Captain Miller’s (Tom Hanks) eyes. The camera makes quick cuts between Miller and the dying soldiers, giving the viewers déjà vu as they watch death after death after death. During these combat scenes, cinematographer Janusz Kaminski utilizes tight angles to focus on the emotions coursing through these soldiers, and uses sweeping camera pans to put these soldiers into perspective. One impactful scene takes place under the water, as soldiers struggling under the waves and corpses are picked off by stray bullets traveling through the water. Saving Private Ryan changed the game. Since then, movies have placed lots of value into their opening scenes; The Matrix and The Dark Knight are two examples. This movie accomplished this large feat while also creating an accurate depiction of war and its savagery.

This space movie captivated audiences with its climactic scenes and exhilarating visual effects. Right off the bat, the audience is treated to a single, long take where two astronauts (Sandra Bullock, George Clooney) are ripped away from their space station after orbiting debris rips it to shreds. The movie continues with a perfect blend of intense close-up shots and dramatic wide-angle shots. In this first scene, Dr. Stone (Bullock) is unable to detach from a long probe connected to her space shuttle. As debris impacts the shuttle, it begins rotating in a circle, with no gravity or friction to slow it down. Dr. Stone continues to spin as the camera remains stationary, with her closing in on and then receding from the camera. This is just one example of cinematographer Emmanuel Lubeski taking advantage of the empty vacuum of space. This long, fluid shot along with others in the film truly encapsulate the isolation of the two characters.

Christopher Nolan’s Inception was outside of the box. This movie revolves around dreaming and the weird things that happen while dreaming combines weird physics and changing landscapes to create a visual masterpiece; for example, the famous city-bending scene. Cinematographer Wally Pfister transforms what would be a relatively uninteresting scene into one of Inception’s most famous. The scene follows dream “extractor” Dom Cobb (Leonardo DiCaprio) as he explains dream building to Ariadne, an American architecture student (Ellen Page). The scene takes place inside a dream, so Ariadne begins to bend the city they are walking in, folding it like a piece of paper. Cobb and Ariadne’s long conversation remains interesting because of this breathtaking shot, along with a handheld camera that follows them as they walk. This scene is simple, yet memorable, and is an example of well-done plot exposition. Other movies have used this combination of visual effects and cinematography with positive results, such as Pacific Rim and Interstellar.

It is impossible to summarize the spectacular beauty of 1917 in this article. Every scene of this war drama is a sight to behold. The reason for this is that the entire movie is filmed to look like one shot, so the beauty is completely seamless and uninterrupted. One intense scene takes place at nighttime, as Lance Corporal Schofield (George MacKay) walks through a German-occupied village. Schofield is stuck in a trance-like state as he watches a building burn down. A German soldier begins to charge at him, but it takes a while for Schofield to notice, leading to an intense chase between the two soldiers. The constant camera movement and beautiful lighting make this short, simple scene much more memorable and realistic. This scene, however, is by no means an outlier; many other scenes incorporate similar strategies to improve the visual aspects of each scene.

These five movies represent the best of the best when it comes to cinematography. You may not like these movies; you may think they have poor storylines or sub-par acting. However, it is hard to ignore their beauty. In my opinion, a film’s visual appeal is its most important quality. The first films only had pictures, no sound or complex plot structures. Without the power of the camera, movies aren’t movies. On February 9th, the Academy will announce the winners of the 92nd Academy Awards, and will decide whether 1917 had the Best Cinematography of the year and if it was this year’s Best Picture. Hopefully, these historical examples have given you context and can help you beat your friends at your Oscar party.