A Peek Into the Lives of Pet People 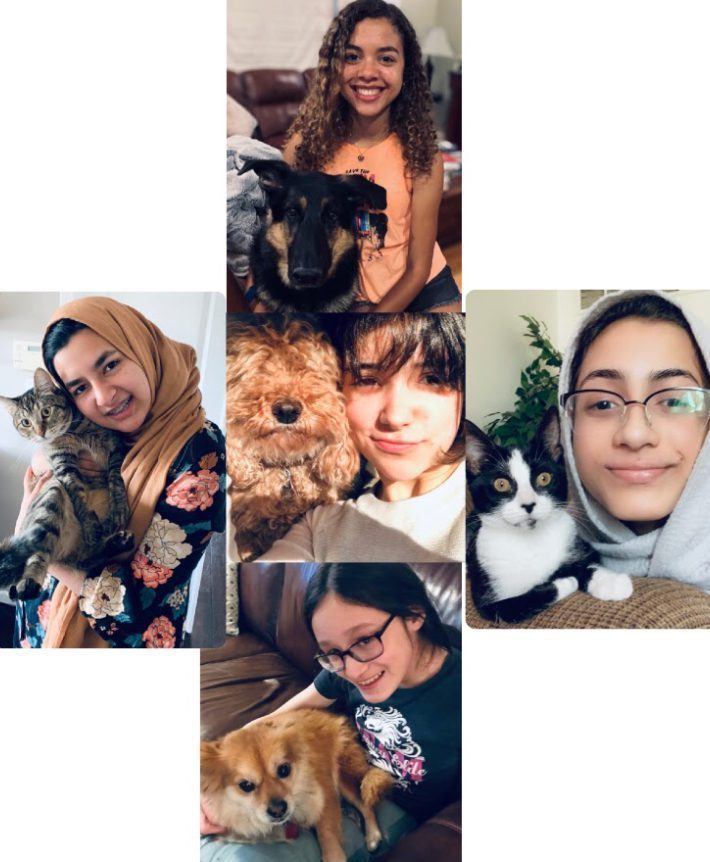 Due to Covid-19, interviewees took their own pictures.

The bond between pets and their owners is unbreakable.

There’s something about having a pet in one’s life that is incomparable to anything else. Is it simply the unique bond between a human and an animal that makes pets so special? What makes a pet a pet?

The first step in this process is of course to name the pet, which can be the hardest and most complex part of a human and animal relationship. After all, one’s name can say a lot about their personality or lifestyle, so picking the right one is extremely important. Junior Mallory Nikols easily named her Miniature Goldendoodle “Theodore, Theo, after the Alvin and the Chipmunks character.” Sophomore Maileigh Cousins, on the other hand, had a bit more difficulty with naming her German Shepherd: “I just kept calling him Fuzzy, [and] then it just turned into Mr. Fuzzles, and that became our official name.” Others did not name their pets themselves, and instead, let others name their pets. Both senior Inayah Ali and sophomore Zaynab Rajapkar had family members that named their cats. Ali states that her cat’s name Coco was suggested by her brother, saying that he “[…] just called her that and it stuck.” Rajapkar says it was her mother that came up with the name Laila because she “ thought it was a really cute name.” Names, no matter how they are given, are meant to suit those who embody them, and this goes for people and pets alike.

Second is the responsibility of keeping a pet in the hustle and bustle of one’s everyday life. Ali comments that taking care of her cat, Coco, consists of “feeding her day to day and changing her litter.” Fellow cat owner Rajapkar adds that the new responsibility of her kitten Laila “was a little bit stressful” because she was “balancing giving Laila attention and finishing [her] work [for school] on time.” However, once she “tried doing all of [her]  schoolwork first,” she was able to then ”play with Laila and give her maximum attention.” Sophomore Skylar Oh builds on this, saying that by helping her family take care of their rescue dog, Ana, the process has “ become routine for [her], so [she doesn’t]  have a hard time making her part of my high school schedule.” Nikols states that her family also shares the responsibility of their dog Theo, “so if anyone is busy doing their work, someone else can step in and take care of him.” Pets are a large responsibility, but having a furry member in the family is definitely worth it in the end.

Last but not least, the companionship of a petーtheir very presence in one’s homeーallows both families and pets to thrive emotionally. Cousins claims that Mr. Fuzzles, although lazy, does enough “ just by being cuddly and adorable, which helps us a lot,” proving that a dash of cuteness in one’s daily life can do wonders. Oh reminisces that her dog Ana is “always there following you around or licking your face,” bringing joy wherever she goes. Ali concludes that having Coco around is rewarding, and “ after we get home after a long day we look forward to seeing her. We try to beat each other inside the house to see Coco first and play with her.”

Pets, no matter what kind, can bring families together, and thanks to their natural cuteness and sweet dispositions, they just might get some cuddles and treats out of the bargain.