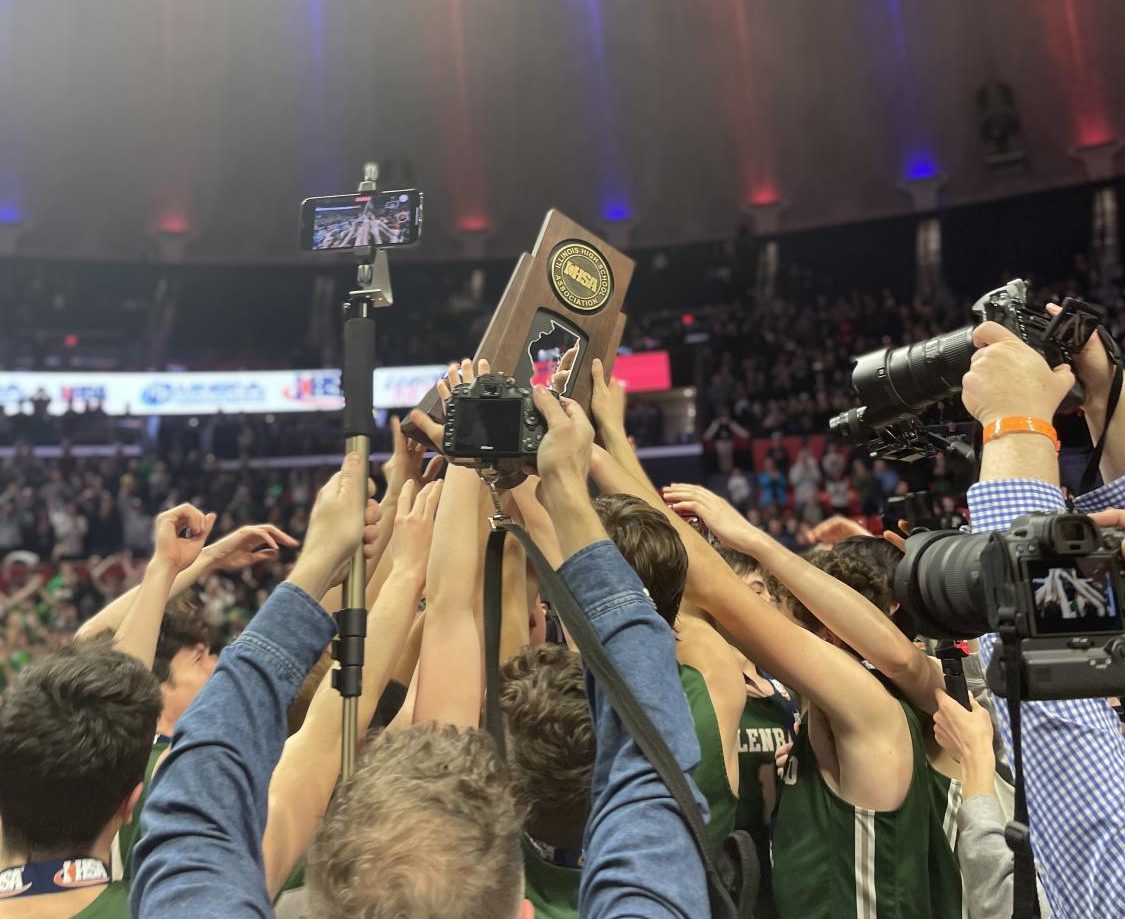 In a conversation with Ryan Stefan of Docurday, who had been following West basketball all season for a documentary, he stated that “When anyone asks me what my story is, I tell them that it’s simple – it’s a Western. Guys go from town to town […] only the best survive.” This year in Illinois basketball, the ‘top gun’, if you will, is Glenbard West.

With a 37-1 record, and having only lost against #2 in the country Sierra Canyon, West had very good chances going into IHSA Playoffs. Beating Wheaton Warrenville South in Sectional Finals 68-41, and Larkin in the Super Sectionals 60-34 sent West down to Urbana-Champaign – the future home of Paxton Warden for the State Semifinals.

Most of Glenbard West – or Glen Ellyn, for that matter trucked down to support the team. Despite the pressure, the Hilltoppers did what they do best: win. Bobby Durkin went 7/12 from the 3 point line, tying the state record and leading West to a 77-47 win against Bolingbrook. However, in the famous words of the late Kobe Bryant, “the job’s not finished” – one game remained between the Hilltoppers and a State Championship.

Similar to the Semifinal, much of Glen Ellyn made the journey down to Urbana-Champaign, ready to cheer on their own. Undeniably, it felt like West had the home field advantage – despite their competition Whitney Young being technically closer to the stadium.

The Whitney Young Magnet High School of Chicago closely beat out Barrington in the State Semifinals 51-47. West may have defeated Whitney Young earlier in the season 74-59, but the Chicago school was missing star Daniel Johnson due to an injury – even if West was the clear favorite, Whitney Young wasn’t going down without a fight. Alongside Johnson, the Whitney Young Dolphins had NIU recruit Xavier Amos, and Will Grudzinski – who came up big and scored 24 points in the Barrington game.

Before the IHSA 4A Championship, the 3A Championship took place – it set the tone for the night, being extremely exciting. Going into double-overtime, KeShon Singleton of Sacred Heart-Griffin hit a clutch last second buzzer beating 3 pointer, beating out Metamora 53-50. As Metamora and Sacred Heart-Griffin left after their award ceremony, the crowd exploded: the kids from Glen Ellyn took to the court. Even during the warmups the crowd was electric. After playoff introductions (and the Hilltoppers’ famous handshakes), the 4A State Championship began.

The Dolphins won the tip off – however, that was about all they won during the entirety of the match. The Hilltoppers came out of the gate with a 5-0 start. During the 5-0 run, Braden Huff hit a 3 that dazzled the West-dominant crowd. Despite small resistance from Whitney Young (and some, but not enough scoring), West remained on top nicely for the rest of the first half. Warden scored an important 8 points in the 2nd quarter alone, while West center Ryan Renfro also took his first of many charges – something that juvenated the stands. Up 25-16 at halftime, the Hilltopers seemed posed to take home the State Championship.

‘It seemed like they stopped playing after the half’ was a recurring sentiment that many West fans had regarding Whitney Young’s playstyle (after halftime). Xavier Amos was unable to stop Huff, while West’s 1-3-1 defense kept the Dolphins at bay. Small comebacks from Whitney Young seemed to start in the 3rd quarter, but weren’t enough. Princeton commit Caden Pierce’s converted and-1 seemed to be what truly put the game away, along with Renfro’s drawing of multiple charges and a Huff dagger-3 that put West up 40-20. All West had to do during the 4th quarter was retain their lead – which they easily did. Up more than enough during the final seconds of the game, reserves were put in – fans rejoiced. The kids from Glen Ellyn had done it! Fans cheered as the award ceremony began. Players raced to the student section to celebrate with their peers – it felt like a win for the school as much as a win for the team.

The next day, a pep rally was held. “It was bittersweet”, said Sophomore attende Nina Zjalic. “Everyone had an overwhelming feeling of pride for them. It’ll be great to see them moving on to greater opportunities that they’ve worked so hard for.”

Congratulations to the 2022 Glenbard West Hilltoppers on their IHSA 4A Basketball State Championship!