Marching Band: The Music of Queen 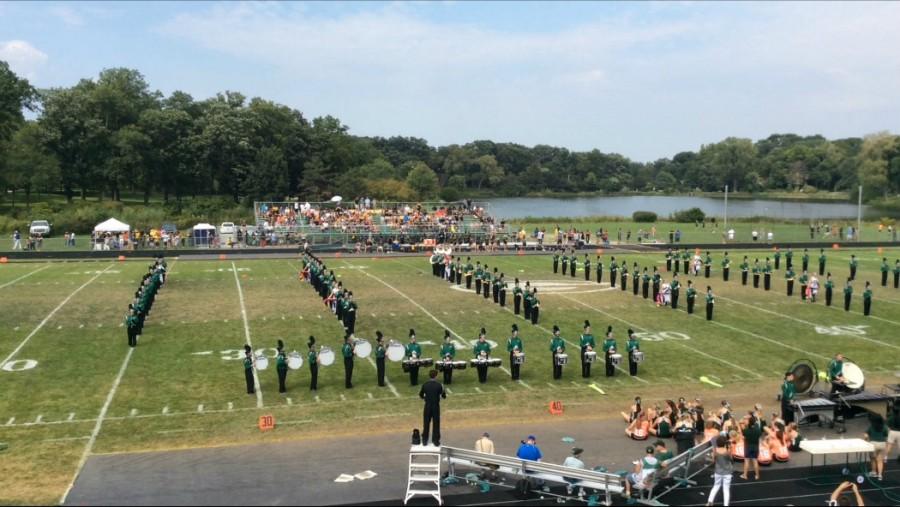 This year’s marching band features well-known music from the rock band Queen creating a unique and reminiscent show for the audience.

The Glenbard West Marching Band hit it off with their first performance on Saturday the 5th. Consisting of 110 members, the band is under the direction of Mr.Walsh with assisting directors Mr. Ortega and Mr. Pesceone. The show this year is The Music of Queen featuring some of the more well-known tracks of rock band Queen; the tunes are “We Will Rock You,” :Another One Bites the Dust,” “Crazy Little Thing Called Love,” and “Bohemian Rhapsody.”

Mr. Pesceone, not only color guard director but also choreographer of the show, explains what goes on behind the scenes with the creation of the show moves:

“For the past two seasons in addition to the color guard choreography,  I have written the drill for the marching band season. This past year, I started the drill the first week of July.  Writing the drill takes about four to five weeks to do with about three to four hours per night during the week and one solid day on each weekend.  In total, I put about ninety to a hundred hours into the drill writing.”

Each move in a song is called a “set” where a marcher moves from one “dot” or point on the field to create a transitional figure or a picture; for example, a crown like in this year’s show. The show has over eighty sets with many different images that represent each song played in the show.

“My opinion on the show music and choreography is that it is slightly harder compared to previous years; but with all the work they’ve put into it, it will be better than previous shows,” says William (PhD) Tran, a senior and alto saxophone in marching band.

Another marcher, freshman flutist Shawna Creaser states, “I really like the show music because it’s easy while difficult to learn and memorize, and the routine looks really cool and has a lot of diversity to it.”

Putting the show together takes effort and time which is why the band goes to Whitewater, Wisconsin and lives on the Whitewater University campus for a week.

For five days, the marching band attends three rehearsals a day on all on field, totaling an amount of eight hours put into learning the show’s music  and moves each day. Meals are provided by the University and recreation times involve playing games in the basement or heading to the pool for some relaxation in the water, they also hold a nighttime activity called “band bonding.” Although many members would say their feet are killing them by the end of the camp, they agree that there was fun had by all.

Mr. Walsh states, “Band, here at Glenbard West, is really a family where you get to celebrate with your best friends and when you are having a bad day you have lots of brothers and sisters to lean and help you through that day.”

Pit and Color Guard are very important to pulling the show together as the Pit enhances the music with different sounds and instruments and the Color Guard adds a unique visual and concept to the songs. Pit is directed by Mr. Ortega.

While many parts of marching band take part on the field, Pit is not one of these. The Pit takes on the role of playing all the instruments the drum line or “battery” doesn’t play. Some of these instruments this year include the marimba, the gong, vibraphone, cymbals, and chimes and more. Because Pit is located in the front of the field , one of the most difficult parts about playing in Pit is staying in time with the band moving on the field because the sound reaches them later than what they see from the drum majors’ directing.

Answering a question about working with the Pit, Mr. Ortega states, “It is not easy moving large pieces of equipment every day along with learning to play so many different percussion instruments, but they do it every day and it is a joy to work with them.”

Color Guard, while they contribute to Marching Band, is also their own separate entity with a successful program called Winter Guard. On field, though, their visuals, expressed through different motions, enhance the mood of each song. which allows the audience another way to be entertained by the show. The captains are Rachel Mulcrone, senior, and Cori Payne, junior.

Rachel Mulcrone states, “Whereas the band plays the music, we memorize a routine.”

She adds, “The friendships have really extended this year [between the Band and the Color Guard] and it’s really fun because I do meet a lot of people.”

Another important role in the Marching Band are Drum Majors. There are generally three each year, this year’s being Geo Smith, senior, and Erin Hernandez and Ori Harris, juniors.

“As a drum major, [our] role on field is to conduct and keep tempo of the show and at the same time [we] serve the members of the band and try to make the overall environment the best it can be,” Geo Smith states.

He also says, “I think it’s awesome that there are tons of different people from all sorts of backgrounds that are involved in other clubs, but we can all come together as one and just hang out together and have fun. It’s just a fantastic time.”

For the show to come together completely, teamwork and cooperation with each other is really needed. So far the show demonstrates this attitude with an even more interesting show than last year and still new things to come. Make sure to check out their opening song in the video provided!

To see more of them later on, click here for the schedule of all the days they will be performing or practicing! Further information can be found here (Stagg schedule) and here (Wheeling schedule) on when and where competitions will take place for the band.